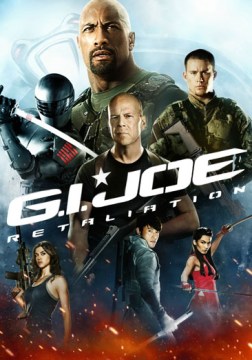 I liked this film well enough. I really liked The Rock. The casting was good, acting could be better, but the action saves it. Very good effects. Just a good film when you have nothing to do. Very improbable events, but action like you'd read in comic books brought to screen with action actors. Fun film.

Better than the original, not amazing. decent action movie tho.

With all the drama involved in casting, I expected this movie to be way worse than it ended up being. The beginning is kind of rough, along with the third quarter, but the middle and ending are pretty great.

I liked this action fiction movie. It is violent most of the movie. It is not appropriate for young audience. It is not very sexual. There is very little dialogue and lots of action. The G.I. Joe are in peril caught in the middle of an conspiracy they have to solve. It is a happy ending. The heroes are rewarded and they save their reputations and the country.

I loved it. The Rock did a great job. There is a lot of explosions and gun fire. Great action movie. I was pleasantly surprised.

This is the updated, live action version of the old G.I. Joe show and is a good weekend action movie.

this was a complete bore acting terrible script horrible.

shiny0Galvantula thinks this title is suitable for 13 years and over

Welling2012 thinks this title is suitable for 12 years and over

stamp thinks this title is suitable for 8 years and over

After the Joes have been accused of a serious crime and soon after terminated for it, three survivors band together to avenge the death of one of there own and fight for the freedom.

Roadblock: I came here when I was fourteen, with a life expectancy of thirteen. I was bounced around from home to home until this... became my home. Guys would line up outside that door to fight me. They whooped my skinny ass so much I started to enjoy it. Until one winter, I grew eight inches, gained sixty pounds, punched a guy so hard he couldn't move his arm to tap out. Then when the Joes came recruiting to the hood, I'd already beaten down half of it. I became a Joe to serve. In the field. So if we're fighting uphill, we take the hill.

There are no notices for this title yet.