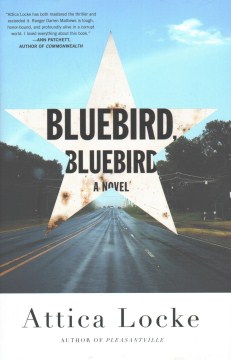 When it comes to law and order, East Texas plays by its own rules--a fact that Darren Mathews, a black Texas Ranger, knows all too well. Deeply ambivalent about growing up black in the lone star state, he was the first in his family to get as far away from Texas as he could. Until duty called him home. When his allegiance to his roots puts his job in jeopardy, he travels up Highway 59 to the small town of Lark, where two murders--a black lawyer from Chicago and a local white woman--have stirred up a hornet's nest of resentment. Darren must solve the crimes--and save himself in the process--before Lark's long-simmering racial fault lines erupt. A rural noir suffused with the unique music, color, and nuance of East Texas, Bluebird, Bluebird is an exhilarating, timely novel about the collision of race and justice in America.
Publisher: New York : Mulholland Books, Little, Brown and Company, 2017
Edition: First edition
ISBN: 9780316363297
0316363294

Chosen at Castro Valley Reads selection for 2020. Solid police procedural with excellent exploration of race and justice themes. Interesting and flawed characters. The music, the food, the tone of the writig will land you right in Texas. PLanned as either of 3 or 4 book series. The second one is called "Heaven, My Home."

I don’t know quite why, but I got 2/3rd’s through and just couldn’t finish the book. It gets rave reviews, but I got tired of reading it.

This is a "stay-up-late-cause-I-need-to-know-what-happens" type of book. It is not the type of read I normally gravitate to (murder-mystery), and I was pleasantly surprised by how entertaining it was. It is very well-written--Attica Locke is such a gifted story-teller--it is a gripping tale that ends with quite a cliff-hanger!! (so I am very glad I didn't read this until the second book was published!) I am looking forward to reading 'Heaven, My Home'; which I've heard is even better than this one.

The language and dialog flow in this beautifully written murder mystery that takes place in a small town in eastern Texas. Long-standing tensions and complicated relationships, the result of racial and class pressures, inform this rich story, where a Black man can get confused as to "which side of the law he belonged, (and) couldn't always remember when it was safe for a black man to follow the rules."

I'm deeply affected by this realistic, gritty & suspenseful mystery. The characters' connections to place, thought-provoking reflections of our divided society and lyrical writing including references to song lyrics is intense! Read for poignant emphasis on social justice as well as Locke’s sense of place rooted in East Texas. And a twisty reveal which profoundly links love to hate!

Have you read any books by Attica Locke?? No? Well, my friends, now is your chance. I really enjoyed the Cutting Season so I knew I wanted to read Locke’s new series. Book 1, Bluebird, Bluebird, won a few prizes last year so it fits the “book by a woman and/or AOC that won a literary award in 2018” category. The good news is that if you enjoy it, you don’t have to wait long because book 2 called Heaven, My Home is available now. I respect the depth Locke brings to her writing and her characters. There’s no shying away from difficult topics and the feelings that rise. JD Jackson’s audiobook narration is excellent and really brought the story to life for me. I can’t wait to see what happens with Darren Mathews next!

While it may be hard to see up in Seattle, but in Texas, especially in small, isolated towns, racism is a daily fact of life. Combined with a strong writing style, this author makes it believable. I like her flawed protagonist with strong morality as a Ranger, who suffers in his personal life. As a social commentary it is a challenging read, but it is prevalent throughout the small town South. As a mystery novel it suffices, with several twists and turns as the plod wends its way to a satisfying conclusion. I look forward to reading more of her work.

At the end of the story I felt overwhelming sorrow at how racism is ingrained in small towns. “Oh, what a tangled web we weave” could be the motto of this story of a black woman and people she loved in a small eastern Texas town.

Don't give then a reason to stop you, son... black men for whom self-regard was both a natural state of being and a survival technique. His uncles adhered to those ancient rules of southern living, for they understood how easily a colored man's general comportment could turn into a matter of life and death. Darren had always wanted to believe that theirs was the last generation to have to live that way, that change might trickle down from the White House. When in fact the opposite had proved to be true. In the wake of Obama, America had told on itself.

She nodded, staring at him in the dim light. “But why come back?”
“Jasper,” he said softly.

“It’s knowing that I’m here, too. I’m Texas, too. They don’t get to decide what this place is,” he said, nodding toward Willy’s mansion behind them. “This is my home, too.”

There are no ages for this title yet.

There are no summaries for this title yet.

There are no notices for this title yet.