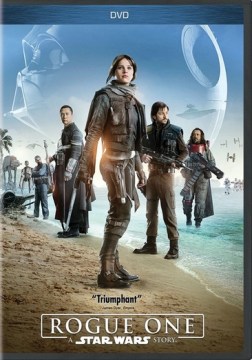 I think this was a great movie! even though it may seem bad to people but its actually not.. its a great glimpse of ep.4

Not bad. First time watching star wars, not a fan of star wars. Have to figure out the characters. Overall the plot ain’t bad. Nice visual effects.

Terrible movie, the blind guy is so dumb and he thinks he can see, but he can't because he's blind. HAHAHAHA!! Also Jyn is so weird and stuf cary

Great performances all around thanks in part to good direction by Gareth Edwards!

I enjoyed it very much!

Highly recommend watching "Star Wars Rogue One ALL Easter Eggs & References" on New Rockstars YouTube channel. To me, Rouge One is the most intriguing plot line from all the side-story installments.

I kept getting distracted by my toenails growing.

Question in movie: Your Highness. The transmission we received. What is it they’ve sent us?
Answer: Hope.

It's a lie. Abandon all hope, ye who enter here. What a steaming pile of dog poo. The only redeeming quality is that all of the story's "heroes" die at the end. It would have improved the movie a lot if they'd died at the beginning instead. This film is absolutely unsuitable for anyone claiming to be sentient.

As part of the original demo for Star Wars I can say I never really carried my love of the series into adulthood. I'm astonished at the reverence given to spin-outs like 'Return of the Jedi'. After the over wrought prequels and one needless, busy and crass sequel (another of which has since been added), I couldn't even remember what I liked about the series as a kid . Rogue One reminded me that the core of the thing is a tried and true Hollywood staple: the War film. Not war as cautionary tale, as was Apocalypse Now, but as a bloodless 'procedural' a la "The Great Escape" or "The Dirty Dozen". As a kid I was always less interested in the mystic space wizards, except as maybe a sidebar, than I was of the soldiers and their cool space ships, robots and ray guns. It does have it's drawbacks though. I don't think the CG Peter Cushing will age well. Eventually Hollywood will discover that acting is more than a guy in capering around in a mo-cap suit. Probably would have been better for the character to be hidden or filmed more in long shot, so as to avoid full-on 'uncanny valley' effect, but I don't think a story like this would be possible without him. Also enjoyed the film as a self-contained story - something we need more of in the world of blockbusters. Rogue One is a 'fan film' in the best sense of the word.

doyoureadme thinks this title is suitable for 1 years and under

flub thinks this title is suitable for 13 years and over

Chinderixx thinks this title is suitable for 14 years and over

Gwen904 thinks this title is suitable for 11 years and over

Alanreviews thinks this title is suitable for 12 years and over

ridley1976 thinks this title is suitable for 10 years and over

green_snake_80 thinks this title is suitable for 11 years and over

green_ant_1650 thinks this title is suitable for 12 years and over

green_cat_3454 thinks this title is suitable for 8 years and over

Micah Thomas Martin thinks this title is suitable for All Ages

K-2SO: Are you actually concerned about my safety?
Jyn Erso: No, I just don't want them to miss and hit me instead.

"There is more than one sort of prison. I sense that you carry yours wherever you go." - Churrit Imwe

I run on my own diagnostics thank you. -K-2SO. That's a good burn.

"It's Stardust." - Jyn Erso, recognizing her father's gift to her

(Jyn tries to make her escape from the prisoner transport) Bam!
K2SO slams her onto the ground.
K2SO: "Congratulations, you're being rescued."

"The force is with me, and I am with the force. And I fear nothing for all is as the force wills it." - Churrit Imwe

"Are you kidding me? I'm blind!" - Churrit Imwe

Violence: Violence at its peak I would say. At least as far as Star Wars goes. Lasers, Vader poning people, emotionally nail death sequences. The whole lot. It's not James Bond or Jason Bourne but still be warned.

Violence: There is lots of violent space battle and fighting scenes. Rogue One is a little more violent than the other Star Wars movies.

Violence: The same as any other star wars movie.

REbel spies get information about the Death Star