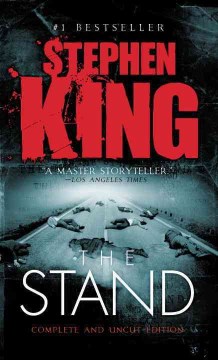 A monumentally devastating plague leaves only a few survivors who, while experiencing dreams of a battle between good and evil, move toward an actual confrontation as they migrate to Boulder, Colorado.
Publisher: New York : Anchor Books, 2011, c1978
Edition: 1st Anchor Books mass-market ed
ISBN: 9780307743688
0307743683

The Stand is a masterpiece. You could argue that it’s not really science fiction, but who cares? It’s a great book.

A patient escapes from a biological testing facility, unknowingly carrying a deadly weapon: a mutated strain of super-flu that will wipe out 99 percent of the world’s population wi... Read More »

I read this book to fulfil the goal read a best seller from the 1990's. It was scary it spots. it was funny in spots. it was sad in spots. In short it was a really good book. of course reading it during coronovirus makes it a little more scary, but overall i really enjoyed it and would recommend it. there are a few cuss words and sex scenes if you are offended by those. it is on listopia's 300 books everyone should read once for good reason.

Gosh I hate being that person but this was one of the worst books I’ve read in a long time. I stuck it through to the end, hoping that it would take a turn but it was a horrific slog, in all honesty. I never seem to have much luck with King’s works.

This is one of the most uninteresting books I have ever read. I don't like giving up on a read once I've started, but this was pure torture. I just couldn't tolerate the bland narrrative and cursing beyond Chapter 11 and gave up.

One of the best books ever. Have read this 5 times and will again.

Released in 1978, King's apocalyptic novel, even at a whopping 1200-plus pages, had been trimmed by 150,000 words. This is the restored version published in 1990. It is back to almost 1200 pages. There is much more character development, some of which I thought was unnecessary. Some characters (like Tom Cullen) could have used more character development. Somewhere in the middle, the story bogged down. The meat of the story started taking place around page 700. I liked the original version better. I found the extra pages were not really necessary. So, all that being said, this is one of King's classics. He is a great writer. This is an easy read, just long.

Perhaps not the most beginner-friendly Stephen King book, but it is one of his most memorable works. There are characters and moments in this book that will stick with you for years after you put it down.

This is a book that hits closer to home in 2020. One of King's greatest books!

The Dark Tower series was meant to be King's Lord of the Rings. But I think he captures the feeling better here, where large scale events are the set up for a pretty clear-cut good vs. evil story. This is my favorite King novel. The 1,200 pages fly by.

The best word I can think of to describe this book is "epic". It's absolutely huge, and it tells the story of the world almost ending. It has good and evil, love and hatred, sickness and health, life and death (mostly death), sex, drugs, rock and roll. And a heroic dog. Somewhere in there was probably a paragraph about the kitchen sink!

That said, despite the immense length, I was never bored. I never felt like "that chapter really didn't need to be there". There wasn't constant page-turning suspense but, really, what reader could cope with that for 1150 pages straight?

This book has two overarching plots - "everyone gets sick and dies" and "good vs evil" - with a large number of subplots running under each of them. They were both very thoroughly explored and the details were reasonably plausible (after the initial suspension of disbelief required for the psychic component of the good vs evil part of the story).

I never got overly attached to any of the characters, but there was enough character development to keep me along for the ride. I didn't fall in love with this book, but I liked it. If there's a movie, I will never watch it; would be way too much gore for me. :-)

If you only ever read one Stephen King book, this should be it. A must read for anyone who likes the post-apocalyptic genre.

Coarse Language: 10/10 Extremely strong and frequent-- Just about every swear word used on every page. Some sexual and other not.

Frightening or Intense Scenes: 10/10 It's a Stephen King book...

STARFLOWER89 thinks this title is suitable for 16 years and over

JihadiConservative thinks this title is suitable for 17 years and over

Rorozoro12 thinks this title is suitable for 15 years and over

It's the end of the world as we know it. A powerful disease has swept across the world, killing 99% of all living things on Earth. But there's more to it than that. The survivors of this deadly plague begin to have visions of two figures; a kind old woman and sinister dark man. Through messages these figures send in dreams, they effectively consolidate the two sides of the age old battle of good and evil.

This novel follows the point of view of multiple characters, all with their own struggles and motivators, including a deaf/mute man, a pregnant woman, a one-hit-wonder rockstar, a small-town meatpacker turned government person of interest, a pariahlike arsonist, and a murderer, to say a few, all linked by this single, profound event. Good and evil are analyzed and juxtaposed to show their true colors, and world-building has never been more eloquent as in "The Stand".

This is definitely my favorite book, an epic in so many ways, yet more engaging than any book this long deserves. This would be a must-read for anybody in my circle, even if just for the fact that it tells the story of so many lives so well.

This book is why Stephen King is considered the master of the horror genre.

It has it all; horror, gore, violence, comedy, suspense, romance, and drama. This is a vast book that I enjoyed completely. Over 1,000 pages of fun!!

I completely recommend this book to anyone that wants a challenging and exciting read.

There are no quotes for this title yet.