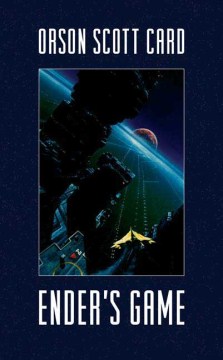 I read this for the "A Genre You Don't Normally Care For" part of my 2020 reading challenge. I'm not usually into science fiction or space or aliens, but this book was fantastic. It's still a bit hard to believe it was 6 year olds accomplishing these things, but I enjoyed the characters and the story didn't end up feeling that far-fetched. The ending surprised me, but it resolved nicely and I'm looking forward to book 2.

I liked the strength of Ender's character and the surprise ending of the book.

One of my favorite books.

This thought-provoking novel by Orson Scott Card explores themes ranging from “How would warfare look in the future?” to “Is it ethical to use children as military commanders in a crisis?”. The book is written through the eyes of Andrew “Ender” Wiggin, a prodigious child who has a knack for strategy. The early part of the book shows how a child might react to being exposed to a totally different world (trying to fit into the group and its dynamics, being on a space station). Eventually, we start to get more information on the alien Formics who attempted to invade Earth, and how they managed to get here undetected.

The climax of the story is set during an epic battle, during which important questions rise, is “The way we win” or “We, won!” what matter the most. In today’s world those issues are important, the way we answer can tell us, where we stand with our values. This story also showed me that there are never easy answers, but I can try to do the best I can, to stay true to my values and correct the mistakes made. 5 Stars.
@wolfteen of the Hamilton Public Library Teen Review Board

This is a great science fiction read. I loved following not only Ender but his brother and sister as well. Most of the relationships in this book are black and white, they all live in the very real gray space. This give the book an authenticity that is missing from many newer science fiction novels. I would recommend this for 6th grade up to adults. I think 15-17 is the ideal age range to read this book for the first time. There is violence and death (nothing too graphic), but I think the overall messages and themes are more relatable to mid or older teens.

I definitely recommend reading this book for young adults and teens. It's action filled and thought provoking. I was required to read it for school and, honestly, this is the only required book I read all the way through. Once you're finished with the book, I recommend seeing the movie.

The story is the same as in the movie, "The Last Starfighter" (1984). You might enjoy that as well. The names have been changed , to protect the copyright.

If you've seen the movie, you should absolutely read the book - all the best, most meaningful plots and relationships were left entirely out of the movie. This is one of the best books I've ever read, and I recommend it to everyone I know!

ami_1 thinks this title is suitable for 13 years and over

Gcatflann thinks this title is suitable for 16 years and over

black_wolf_3090 thinks this title is suitable for 11 years and over

Noot_Incog thinks this title is suitable for 12 years and over

FinleyVickers thinks this title is suitable for 12 years and over

violet_spider_40 thinks this title is suitable for 11 years and over

ThePistachioKing thinks this title is suitable for 14 years and over

black_chicken_135 thinks this title is suitable for 14 years and over

Gwen904 thinks this title is suitable for 12 years and over

blue_bear_6056 thinks this title is suitable for 11 years and over

"So the whole war is because we can't talk to each other."

“Alai suddenly kissed Ender on the cheek and whispered in his ear, ‘Salaam.’ Then, red-faced, he turned away and walked to his own bed at the back of the barracks.”

"I'll lie to him."
"And if that doesn't work?"
"Then I'll tell the truth. We're allowed to do that, in emergencies. We can't plan for everything, you know."

"They found me through the ansible followed it and dwelt in my mind. In the agony of my tortured dreams they came to know me, even as I spent my days destroying them; they found my fear of them, and found also that I had no knowledge I was killing them. In the few weeks they had, they build this place for me, and the Giant's corpse and the playground and the ledge at the end of the world, so I would find this place by the evidence of my eyes. I am the only one they know, and so they can only talk to me and through me."
-Ender

If you could make them feel as you can make me feel, then perhaps they could forgive you.
-Ender

"Third, the most noble title a child can have."

"Sometimes a lie is more dependable than the truth"

Violence: lots...fist fights zero gravity fight Ender breaks a guys arm and crushes a boys arm and it crushes his lungs and heart

Genius kid, aliens, video games and fake battles with no gravity to train for war, and a whole space station! How cool, right?

After being attacked by aliens for the second time, Earth’s government is preparing for a third encounter with the creatures known as the ‘buggers’. Six-year-old Ender Wiggin, the youngest of three brilliant children, has been monitored by the military for his suitability as a potential commander in the upcoming war. Surpassing expectations, Ender is taken to interstellar Battle School where he learns the arts of military strategy and leadership, practicing his skills in simulated war games while leading an isolated and lonely existence of his instructors’ design.

Readers will quickly come to sympathize with Ender; he misses his family, wishes for friendship and acceptance, doesn't want to hurt anyone, and above all wants to be a good person. Ender's deepest fear is not of the buggers or death in battle, but of seeing his sadistic brother's tendencies in himself, a dread triggered by Ender's strong survival instincts and calculated acts of self-preservation. As Ender is forced to defend himself, and his brother Peter struggles to master his own violent impulses, their sister Valentine observes that the brothers are “Two sides of the same coin, but which side is which?” (p. 238) Ender's Game raises the question of what makes killing a crime: the act itself, or the motivation behind it? Good fiction refrains from delivering a moral lecture, instead leading readers to ask themselves difficult questions, and teens will appreciate the absence of pat answers in this novel as they work out their own views.

Ender's genius is evident in his unusually independent and innovative thinking, and his ability to adapt to new situations. He is creative and elastic, pushing beyond perceptual barriers to find original ways of solving problems. As a leader, Ender wisely trusts his soldiers to develop winning strategies through play and experimentation. It soon becomes apparent to the reader why risk-taking children, not yet entrenched in restrictive patterns of thinking, are the government's hope to save the human race from destruction.

The novel touches on a plethora of topics ranging from religious oppression to colonisation. The importance of communication, perspective and understanding are underscored with the revelation that the entire bugger war is due to the failure of the two sides on these counts.
Trust, deception and manipulation run through the adult/child relationships in the book. The Battle School trains students to be weapons in a war for the common good, and treats them accordingly without indulging individual desires. Teen readers will relate as adults in their lives enforce decisions about school and socializing that are more in line with long-term societal values and expectations than the immediate wishes of the teens themselves.

Ender's Game balances the inherent excitement and action of battle with psychology and politics, exploring diverse, complex characters and the relationships between them. Set largely in outer space with gifted protagonists aged six to sixteen, this lengthy and multilayered tale will appeal to strong readers of all genders, especially those with an interest in war, computer games, outer space, or fiction involving moral dilemmas. The final part of the book is a moving meditation on guilt and forgiveness, with a surprising and complicated chance at redemption. Teens entering the age of independence and deliberation will take heart from the novel’s message that whatever mistakes they have made in the past, be they crimes or ignorant acts of recklessness, the future is still theirs to shape.