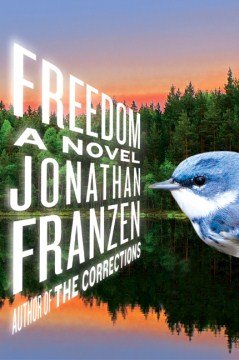 Baker & Taylor
The idyllic lives of civic-minded environmentalists Patty and Walter Berglund come into question when their son moves in with aggressive Republican neighbors, green lawyer Walter takes a job in the coal industry, and go-getter Patty becomes increasingly unstable and enraged.

Patty and Walter Berglund were the new pioneers of old St. Paul—the gentrifiers, the hands-on parents, the avant-garde of the Whole Foods generation. Patty was the ideal sort of neighbor, who could tell you where to recycle your batteries and how to get the local cops to actually do their job. She was an enviably perfect mother and the wife of Walter's dreams. Together with Walter—environmental lawyer, commuter cyclist, total family man—she was doing her small part to build a better world.

But now, in the new millennium, the Berglunds have become a mystery. Why has their teenage son moved in with the aggressively Republican family next door? Why has Walter taken a job working with Big Coal? What exactly is Richard Katz—outré rocker and Walter's college best friend and rival—still doing in the picture? Most of all, what has happened to Patty? Why has the bright star of Barrier Street become "a very different kind of neighbor," an implacable Fury coming unhinged before the street's attentive eyes?

In his first novel since The Corrections, Jonathan Franzen has given us an epic of contemporary love and marriage. Freedom comically and tragically captures the temptations and burdens of liberty: the thrills of teenage lust, the shaken compromises of middle age, the wages of suburban sprawl, the heavy weight of empire. In charting the mistakes and joys of Freedom's characters as they struggle to learn how to live in an ever more confusing world, Franzen has produced an indelible and deeply moving portrait of our time.

From the National Book Award-winning author of The Corrections, a darkly comedic novel about family.

Couldn't put it down. Definitely want to read Purity now.

One of the most beautiful works of fiction I've ever read. Franzen's mastery of writing makes this book such a pleasure to read. It is definitely a darker subject matter but had themes that everyone can relate to.

I just finished it and I’m having serious book withdrawal! It was a world I did not want to leave behind, even after all 562 pages. His earlier work, The Corrections, was on my best-ever list but this one topped it. The story follows the Berglund family and their good friends, lovers and neighbours across a few decades, right up to the Obama era. It was unnerving the way I recognized these people, even saw myself in them to the point of discomfort at times. (Oh no, that’s what I do!) I was taken deeply into a into a tangle of complex relationships, politics and emotion, but left with a satisfying, but unpredictable resolution. If you like dense, brilliant writing, highly perceptive social commentary and astounding insight into urban family life and people’s behaviour, you might love this book as well. (submitted by LC)

Dense, literary novels aren't usually "page turners", but I couldn't put this down! Franzen displays a mastery of the English language and amazing insight into the human psyche. — John K., Eden Prairie Library

One of my favorite books of all time. If you enjoy thrillers, whodunits, or non-stop plot turns keep looking. This is a completely character driven story, giving you a ringside seat to their thoughts - the insecurities, dreams, fears, self-torture, wonder, ambivalence, sexual weirdness, and the desperate need to be cool and desired that we thought was our idiosyncratic, private shame. Sex, fights, break-ups, love, lust, boredom, treachery, diversion, all against the backdrop of our steady progression towards middle age and irrelevance. I can identify with several of these characters at some point in my life, to some degree, whether or not I would admit it. I am an avid reader serious, well-reviewed, and award winning fiction, but also yearly top 10 lists, and every genre. This book is easily in my top ten, and it is reminiscent of Eggers, and second only to The Corrections.

For me Freedom, published in 2010, served as a coda for the time described by Frank Rich as the decade of the zeros. (The 1980’s were called the 80’s, the 1990’s were called the 90’s…) Franzen captures the time when things were done without a regard for the consequences. Americans were “free” but had no regard for how their choices affected others. This was true both at the level of individuals and at the level of the entire nation.

Franzen’s epic novel follows the Berglund family as they become corrupted and gradually find their ways back to integrity. The father, directing a non-profit environmental conservation organization, finds himself an enabler for a wealthy man who wants to strip mine for coal (mountain top removal). In his mind this is a good thing. The mother slashes her neighbor’s tires and has an affair. The son becomes a war profiteer. Meanwhile at a national level two wars are begun while taxes are cut.

The characters in Freedom eventually return to a state of integrity, where they are considering the wider consequences of their actions and there is a reckoning. The fate of the country isn’t resolved but Franzen’s description is the most vivid of our current state that I’ve read.

The book is deeply unsatisfying with caricatures rather than characters, endless verbiage and no message or point to it all. I really like Franzen ("Strong Motions" and "The Corrections" and his essays "How to be Alone") but he really needs a severe editor to keep him in line now. I only finished it through stubbornness and cannot recommend it.

Didn't finish. Somehow it failed to hold my interest, as his previous books did.

Fascinating. Characters come alive and are exposed completely, making them very real, very real... My favorite character had the same environmental principles as I do, but acted on them. Fascinating.

Complex story of marriage, infidelity, and maturity. Freedom as a concept is explored in various ironic guises, never escaping from the imperative of responsible behavior. Any freedom that most of these characters experience is always haunted by the weight of hypocrisy and self-delusion.

marishkajuko thinks this title is suitable for 18 years and over

Patty and Walter's children grow up in a family that is troubled by the love triangle of Patty, Walter and Richard.

"Lalitha was better than Patty. This was simply a fact. But Walter felt that he would sooner die than acknowledge this obvious fact to Patty, however much he might turn out to love Lalitha, and however unworkable his life with Patty had become, he loved Patty in some wholly other way, some larger and more abstract but nevertheless essential way that was about a lifetime of responsibility; about being a good person." p.304